The boys jumped right into the deep end with their study of patterns, as they embarked on the tedious, frustrating task of string art. They had created art like this before, with nails and plywood, but the pins and delicate thread were a whole new ball game. 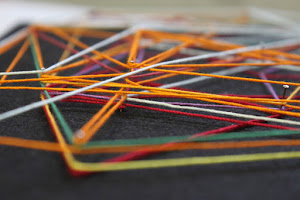 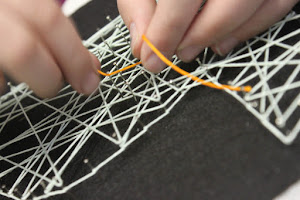 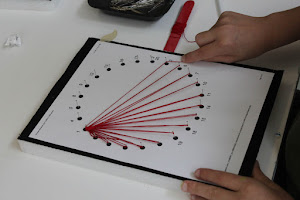 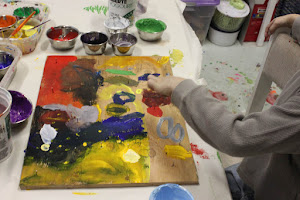 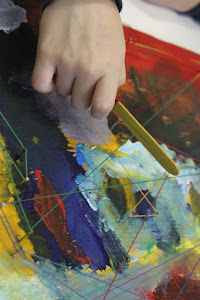 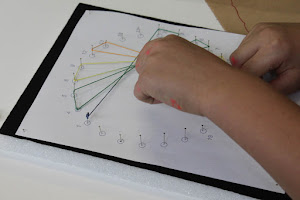 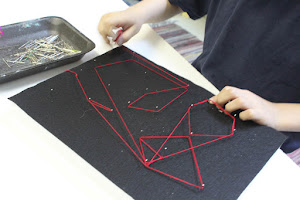 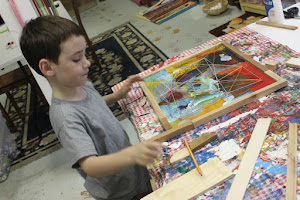 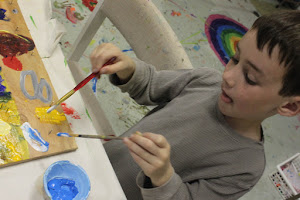 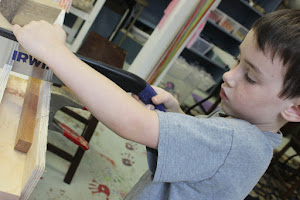 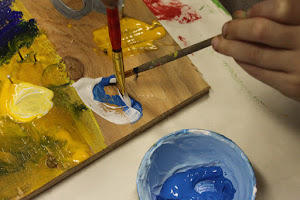 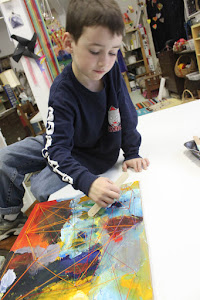 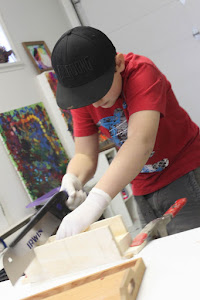 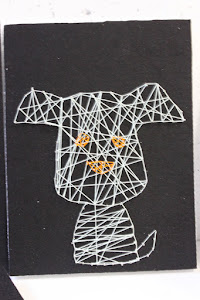 M followed a pattern from numbers, and H created a fan pattern of his own. Each boy had to do and redo their stringing several times, and I marveled at their perseverance.

M: It’s kind of like the God’s eye… Hey mine is starting to take shape! Look!

H: Rachel, you know what I’m going to do? I’m going to run in zig-zags around all these. Can I just pick a pattern in this book maybe to do? I just haven’t figured out what I want to do yet.

H had to start all over again a few times, which was very frustrating. He found himself in almost complete discouragement, but bravely kept on until he got the hang of it and his own beautiful pattern emerged.

H: I find it easier to draw than to do this!

H: M, I think yours already looks like it. Mine’s starting to look like a fan, just how I want it to. Hey Rachel, look, it’s emerging. I notice that the fan gets thinner and thinner and thinner as I work… Mine seems to be holding up quite nicely now… finally!

M: It went quicker than the God’s eye.

M: I’m going to leave it just how it is. I want mom to put it up on the wall on Christmas eve.

The boys are always so encouraging of each other, both with their process and product.

H found a huge leap in his ability to handle the string, and M thought it was even more challenging his second time through! I think maybe he forgot how hard he worked last time, and how much he had to persevere to complete the circle, constantly having to restring where it slipped off the posts.
M: Why is the one so hard, and the first one wasn’t?

H: The first one for me was extremely hard, but this one was easy as pie.


H and M loved the string art. It was by far their favourite new art form of the term. M had even said that he wished that he lived in the olden days so that he could make string art for a living.

In this piece, M and H have taken their newly learned craft to the up a notch. They went big. And green. With a good sized piece of plywood, a couple of hammers, a pile of nails, a can of green paint, the canvas was laid for the next level of string art.

They had fun with the painting process, and worked as a team.

M: The good thing about bristles is you can paint right through the nails.

H: And now we have green nails.

H: Makes it look like it hasn’t been painted.

H: Your up and down is my side to side.

When they got to the stringing stage, M and H worked quietly and efficiently alongside each other, weaving their strings around and around their green board. They enjoyed the freedom of the random pattern, with M using the rainbow thread, and H with red, orange, and mint.

M: It’s a bit more crowed in the top end.

H: Like there’s been a big explosion and everybody’s seeing what caused it.

The boys began to seek out new connections, to criss-cross, weave their string and envision their final piece as they worked.

Finn took to the string art, like a fish to water. He spent almost the entire class on his piece. First, deciding on creating his own pattern and then finding his own way to string his thread.

He kept looking at his string art from the side, noticing the way the strings went up and down.

Finn: Some are down, some are up. That’s makes it even cooler.

Finn: It’s like an obstacle course that you can’t touch the ropes. You can’t touch the ropes and you have to get all the way through to the other side. It’s very tricky though. You might want to save the tricky for the last, or you might want the tricky at the start, to get it over with. But it’s tricky all the way!! It’s getting harder and harder to jump through every second!

He began with what seemed like random choices, but soon his vision began to develop into a story: His posts became restaurants, and the thread became the cars going between them, and he verbalized his imaginative thinking the whole way!

Finn: Hey these are all popular places. Hey it’s like they are each restaurants, and they are all popular restaurants. And every different colour car is coming to each restaurant. It’s certainly good food, right? Look how many people are going to each restaurant! I’m even amazed that all these people are going to the restaurants. It’s a harbor, and I guess everybody likes seafood! I would go there if it was a thousand dollars! If the bill was a thousand dollars! For Chinese people, that’s a popular food, seafood. I bet. But these are all serving seafood, but look all the cars are getting ready to move. Look at the cars! The strings, those are the cars. It shows the paths of the different cars… and it shows where they started, and where they end. And they end up in a hotel, but the hotel is actually a fancy food place too. It’s thousand dollar meals all day. You could spend $3000 in a day, that’s the most you could spend. Unless you got a bargain. Or a coupon. I don’t know, maybe one penny off. That’s the biggest deal. Actually it’s one half-penny off. Half-pennies are rare….

In our next class, Finn took his string art to the next level. We got a nice piece of plywood, and Finn began to hammer nails into it, for the anchors for his string. The hammer was quite heavy, and cumbersome for him to use, so Finn put a pencil mark for each post and I helped him finish off the hammering. The real interesting work came when Finn painted the background. I asked him what colours he wanted to use, and he knew exactly.

Finn: What about the primary colours? The three colours that can make the whole rainbow.

Finn: A red restaurant. On the map, it’s circled a red restaurant. That could be a hot road. That’s on fire. A restaurant on fire! That’s like a bug! He’s bleeding. Look, it’s like a ninja, with bats swarming around his head, and bunny ears and a sack full of something.

While he worked, I drew his attention to how he was mixing colours, and applying the paint and the effects he was achieving. He even tried to paint with both hands, a paintbrush in each hand, two different colours, mixing and playing together.

Finn: That makes the job go by faster, doesn’t it?

It was pretty clear that this painting was not only an exploration into his imagination, but also into his growing understanding of colour and paint.

Finn: Look onion rings! Oh, hey, I’ll have an onion ring. Wait, that’s paint!
Look at this, it’s like ice-cream. Yum yum yum… Purple is kind of a nice, colour, I think. Now, skin colour, I’m mixing purple with skin colour. I’m making a grey. A grey ball. This is a light grey. Actually it’s kind of silver. If it wasn’t for the purple….

We had some fun occasionally flipping his canvas around, so that he would get a different perspective and see what new ideas he could conjure, which he really enjoyed!

Finn: A giant mushroom in a crazy coloured sky, 2 onion rings, and a little road, two other little onion rings, a monster with a blood spot, some rocks, a green road, a dolphin, with a rainbow coming out of him backwards, and then another grey dot with a swirl. Look at that old man. And do you know what, if you look at that, it’s kind of like a monster; an eye, a foot, a body, his mouth, a nose… his mouth is kind of in a weird spot.

During the next class, Finn added the string layer to his cool piece.

Rachel: How do you decide where to go next?

Finn: I don’t. I just randomly do it.

He bounced his finger up and down all over the strings, with all sorts of bouncy sound effects. He had more fun playing with the string than anyone.

Finn was starting to notice the pattern emerging in his piece. He started off in randomness, and then began seeing the lines and shapes.

Finn: I’m making that triangle into other triangles.

Finn: What if I created a circle? How do you think I would do that?

He noticed that it was kind of like connect-the-dots, or drawing with the string. He even developed his own method of random stringing. He would wrap the string around all different posts, while his other hand was suspending the string. When he would let go, the string loosened around all the posts, and he then pulled tight and saw where the string grabbed.

Finn: I do that, and I see what happens. I see what’s left. And it makes a new shape. I just pull it. It’s another thing you can do with string art.

Abi had tried the string art once before at summer camp here, and when she saw that the other students this term were giving it a go, she wanted to do it again, as well. It was really great to see Abi’s desire to revisit a project that she had done before, this time with a new pattern and approach.

At first Abi wanted to do a cat, telling me that it would be much easier than a dog, because of the ears and eyes. But I knew that Abi loves dogs, so I pushed her to take up the challenge of the more difficult pattern, because she was more than capable of doing it. And she was up for the challenge! She decided on creating “Maggie” as string art.

Abi: That’s the good part. It’s supposed to be a challenge.

When she worked, she chatted about this and that; family, school, Maggie, Zoe… You could just tell that her mind was in that free and clear creative place.
She worked meticulously and methodically, and her focus was a pleasure to watch. And her skills are developing quickly! Abi’s confidence on this second go-around was amazing! She was so mentally prepared that she was able envision something that she knew was going to be challenging, and carry it through to the end, step by step.


Abi: She has to be all the same colour, be cause Maggie is all one colour.

Rachel: But this is art! You get to be creative!

Abi: Maybe we could give her a collar. Don’t forget we have to do the eyes!


Abi: Maggie’s head is almost finished. Just this ear, maybe a little more on this ear, and then we should be good. And then we could make something that says “Maggie in the land of string.” My Grandma likes dogs like Maggie. She’d probably get along fairly well with Maggie if she knew her…