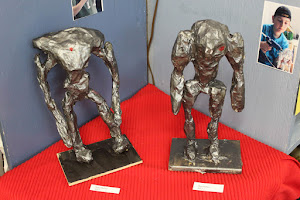 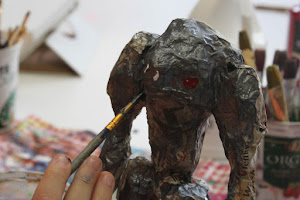 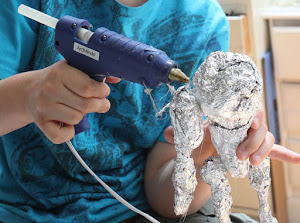 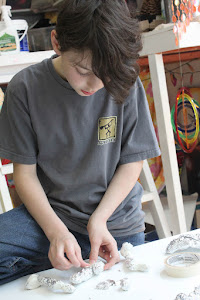 After a “tedious” painting lesson, the boys were very eager to move onto something of their own choice. Paper mache droids. The first step was to form all the body parts with tinfoil.

M: H might need to start out with a wire frame. But I was thinking of starting out with the feet, the shin parts.

H: I did something very very bad. I changed my mind. It’s the very same materials, but it’s a different picture. It’s an aqua droid.

M: You know what the Aqua Droids look like H.

H: Yah, I know. They’re pretty much the exact same as the Super Battle droids, except their skinnier.

M: All the detail is going to be put on by paint, different shades.

I helped the boys along, with building their shapes, making them as exact as possible, which was hard because the droids are pretty complicated! But piece by piece, legs, feet, shoulders, arms, they were built. And they looked fantastic.

M was so happy that they had just the right amount of time to complete this final project.

M: Paper mache next class, and painting the next. Just the perfect amount of time.


When it was time for paper mache, the boys found out that it was harder than they thought it would be.

M: I thought it would be zip, zip zip, and then it’d be done. It’d be easier if it was standing up.

H: Rachel, I could really use a hand right now. Look at this! I already put 3 layers on it!!!

M: I have to cover every inch of tinfoil. We should send pictures of these to George Lucas. I’m not joking.

H: Well I don’t have his email or address.