Once in a while, you get to be a part of a break through. Even if it happens to you, it’s something you can’t predict, or intentionally make happen. It just does. This time, it started with M and H’s time spent playing and experimenting with the overhead projector. 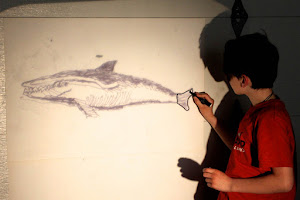 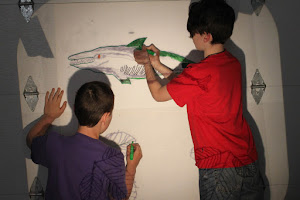 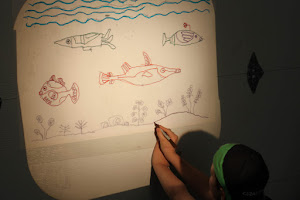 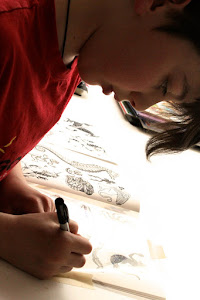 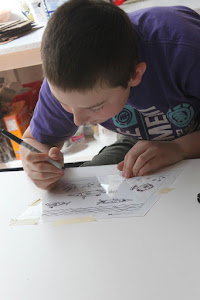 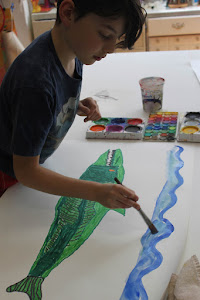 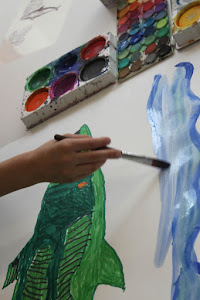 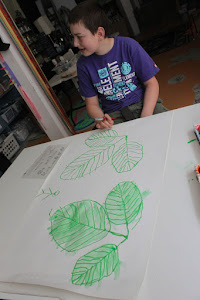 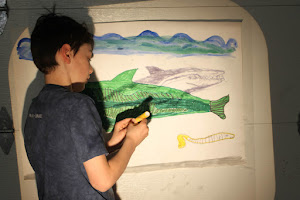 Once in a while, you get to be a part of a break through. Even if it happens to you, it’s something you can’t predict, or intentionally make happen. It just does. This time, it started with M and H’s time spent playing and experimenting with the overhead projector. Projecting alone was pretty fun, but when the idea sprouted about the boys finding images they liked, and then tracing them, projecting them, and tracing them again, much much larger, they took off. This was the breakthrough that for M, was a long time coming.
This process was exactly what he needed to slow his hand down enough to get the control that up until that point, I think, had been so elusive to him. His fine motor was finally operating at a speed where M could truly be in the driver seat, and he felt it. He did so well, and felt so good about himself, that he declared it his favourite art form thus far.

M: Some of this stuff does look pretty amazing. The waves are the most boring part of the whole procedure.

M: The waves were the most difficult of the process. I’m really good at the fish.

H: These are going to be super cool when we put them on the projector. I’d rather do mine separate.

M: Like move the projector to a different spot and do one at a time, then H can help me.

H: Yah, I’ll help you. I just don’t want M helping me. Because he’s a bit squiggly. At times. But M is actually really good at big things, since he can go crazy, since there’s so much room.

M: Yah, I can go vroom vroom vroom. I do this even now, I just draw a crazy shape, and then it resembles something.

M: I am really good at abstract. I never noticed that.

Rachel: This is good skill building for you M. Look at how slowly you are moving your pen. That’s how slow you have to go to have the control to draw precision stuff like that fish.

M: Maybe I could draw this someday.

H: I’m going to do something slightly different for his eye. I’m going to do “eye of Ender”. So let’s take a look at that eye. The eye is creepy, hey? It’s a snake eye. Snake or cat eye. Or General Greivous eye. Or eye of Ender. That’s from Minecraft. Except it’s a yellowish greenish blue colour.

H: The shadow’s just the difficult part, so be careful what you do.

H: Yah, that’s why I was saying it’d be helpful if you were a ghost.

Rachel: You’ll get the hang of it soon.

H: I’ve gotten the hang of the shadow. You’ve just got to keep your marker in front of your shadow, that’s all. Hold your marker like this, and it’s easy.

M: I’ll do it my way….Shadow tracing is my favourite.

Rachel: I can’t wait until you add paint to these.

M: Add paint, and do you know what’s even more exciting? I can’t wait to do my Indian fish drawing sort of thing… But let’s not fantasize until this leaf one is done.

M: It looks more like a shark rather than a whale, H.

M: I can’t believe I drew that!

H: Can you believe I drew this?

M: Hey do you know what? I’m going to do a Christmas tree for Christmas, and a Halloween one for Halloween, and a Thanksgiving one, which would be a turkey.

H: You know what this one was for? My birthday. Next year. Or for Leprechaun day.

M used different colours in his enlarged tracing, and H had to offer his two bits.

M: I’m going to do the rest completely lime green.

H: Lime green. Are you sure? What about the plants? How about you do burgundy, red, light green, yellow, and dark green.


H: Well, just, make sure you put burgundy red in there, because there’s a lot of burgundy red plants, and maybe actually you should draw some of your own seaweed. I like burgundy red, it’s one of my favourite colours.

It wasn’t only H offering ideas, I also flooded M with suggestions of how he could keep going and add more to his drawing, but he was decidedly done. And he was proud of himself.

Way to go. Amazing work, break though, and final piece of work for all to enjoy.