M and H drew immediate inspiration from the neon paint. They were motivated to paint on canvas, and try the new and exciting colours in all the ways they could. 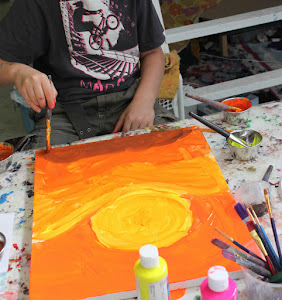 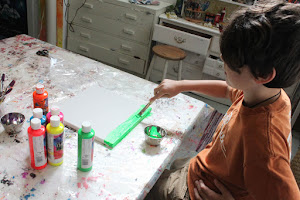 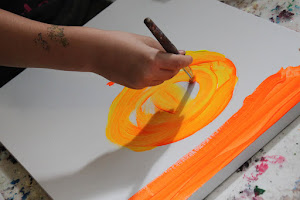 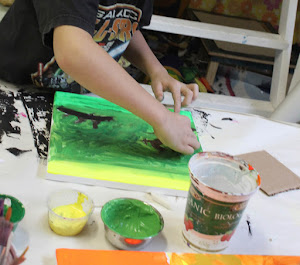 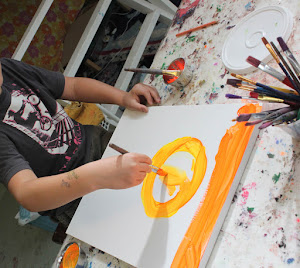 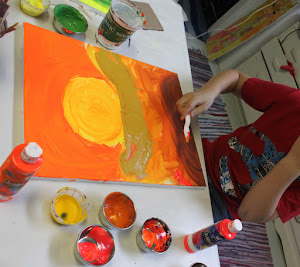 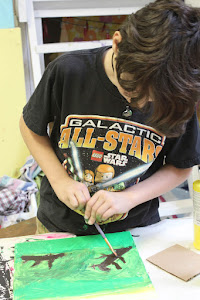 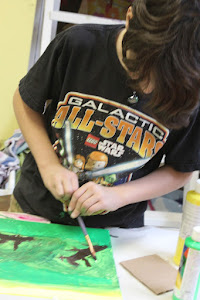 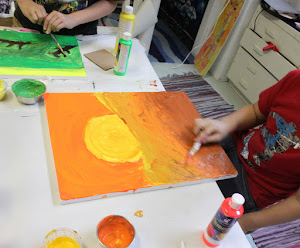 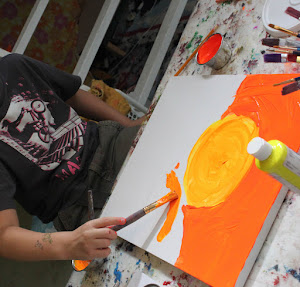 M decided to paint a lovely landscape painting of a prairie sunrise. He took some time to decide what colour to paint the land, and I talked to him about the way distance and lighting seemingly changes the colours of things. How distant hills look blue, even when we know they are forested in trees. So M eventually settled on the look of fields of golden grain, using the colours of his sky, darkened with a bit of brown. He took time and care with his brush strokes, which created the serene feel of his painting. He showed the colour gradation of the hills, darkening into the distance.

M: Instead of sunset, how about it’s rising up to morning.
I was wondering if I could use masking tape to ah, tape, like a round sort of thing.

Rachel: Do you want it to be the sun?

M: Yah sort of. Like these can be the rays coming up.

We then found a lid for M, which was a much better tool for the job.

M: Like when I did the Yin-Yang symbol? Sure, I’ll pick it! This will do. I’m going to do a tracing… Perfect shape! I’m not sure. I know the rays should be orange, but shouldn’t the sun be yellow or something? …Oh that’s a perfect sun!

M paid wonderful attention to the direction of his brush strokes, and his vision began unfolding for him.

M: Now that looks like what I was thinking about! I’m doing the brightest stuff up at the top, because that’s where the suns always the least effective in the morning.


H: Now what do I need? What’s the lightest colour you have? Just white?

M: I want it to be like a prairie slope, where the suns going on the slope, and where the prairie dogs are and stuff. I have no problem with the background and all, I’m just having a problem with it looking like it’s on a slope.

M ended up using a gradation of tones; lighter to darker, to show depth and used his brush strokes to show the direction of the slope as well.

M: Look at the strokes of the brush, it kind of looks like waves.

H also was getting his desired results with his painting. It was nice to see how far the boys have come in their ability to think of an idea and see it through with focus and determination. Their increasing understanding of paint, and everything that goes with it, is showing itself here in bright, bold fluorescent colours!

H added many shades of green to achieve a sense of depth in his swamp. He even added bits of red into the green foliage to create the look of shadows in the greens. M did darker shades at the bottom of his painting, and lighter as he got higher.

They revisited their paintings a few weeks later, and used palette knives to create different textures. M added a beautiful amount of depth with his second layer of paint. He played, explored, and experimented with blending using the knife.

H added thick paint to his swamp logs to create the illusion of bark, and added further depth to his swamp with more layers of paint. He played with the new painting tool, and found some new application techniques along the way.

H: I found something else you can do with the knife. Suction painting!

H was a little more resistant to changing his original, and didn’t make as many changes as M. But the important thing was that he thought about it, and made a few changes to add impact to his art. It shows that his is growing in his sense of the value in refinement, I think. The willingness to re-visit and make alterations is a courageous stepping-stone towards becoming an artist.


I got M to stand back and look at his painting from a distance, calling on him to look objectively and critically about what is working and what isn’t. He

Rachel: I really like how this red spot matches the colour of the sun.

M: It kind of looks like a hill. Because those colours come creeping in with the sunlight. I think it needs a bit more white though. This part here doesn’t look that good.

We talked about the texture of the knife, and how I liked that you could semi-blend colours with it, and M found the blending to be just the effect he was aiming for.

M: What I see is that, there, because I focused all that brown, I see it very gradually going up into light.