Recycling is my favourite. This fox project was top-notch in that regard! 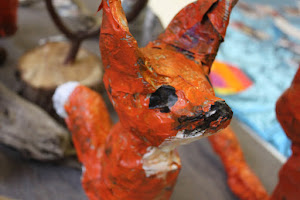 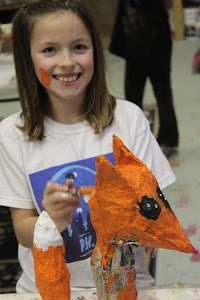 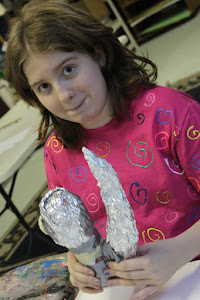 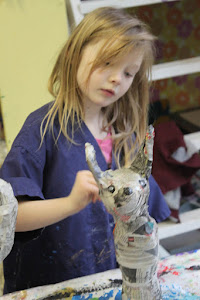 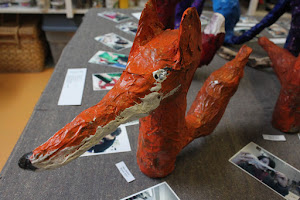 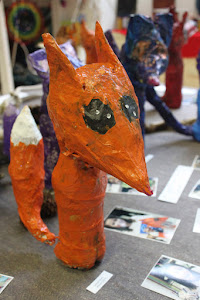 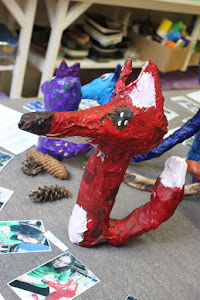 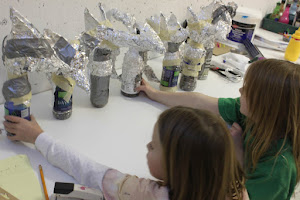 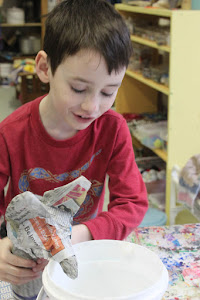 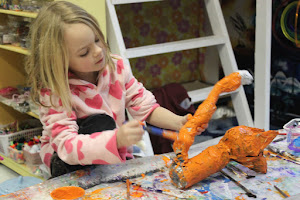 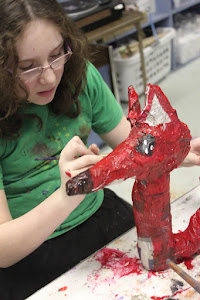 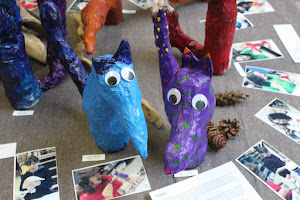 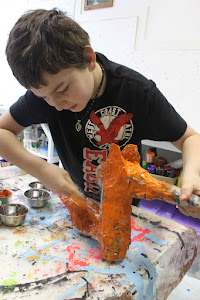 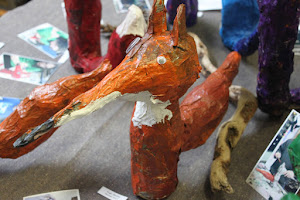 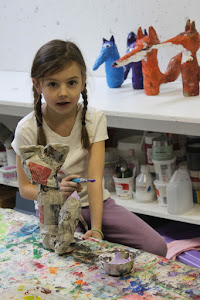 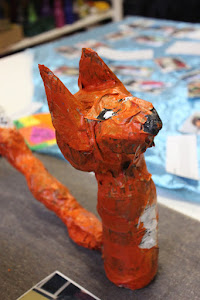 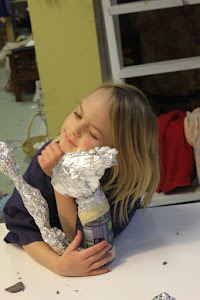 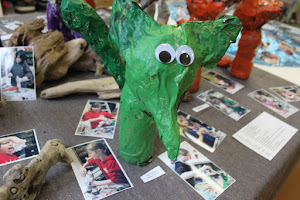 Isabel and Anna make a good team. Working alongside a friend can not only be comforting, but inspiring as well, and the friendship that these girls share is a perfect foundation for their creativity. They talk about school, teachers, and friends as the busy their hands in their projects. The conversations flow between them just as freely as their ideas and inspiration.

Anna opened up on the first day and began to chat about the joys of creative freedom. She expressed the desire to make things her way, and to explore her own imaginative ideas… I told her she came to the right place! She described her vision for creation as “abstract and strange, and that she could add different things to it.”

Working with the paper mache goop can be quite the sensory experience, and Anna had quite the hilarious reaction to the feeling of it on her hands. She grimaced and groaned at the feel of it, but persevered through the unpleasantness, and I suspect that her aversion wasn’t so serious… until I told her to watch out for “old lady hands” which happens when the goop dries onto your skin! That was funny.

Anna and Isabel spent quite a few minutes, just trying out the different sizes of googly eyes for their foxes. They had a blast, making themselves laugh at the different options, and the different expressions they could render. Isabel even momentarily declared her fox a Cyclops fox! It’s great to see their sense of humor come out in their work.

Anna proclaimed that her fox was a boy fox, even though he was purple.

Anna: I don’t want anything natural about my fox.

Anna developed more than one story of how he came to be so spotted and snazzy, one had to do with him going to a spray paint factory!

Anna: He got hunted down and tranquilized but he was so cute that the hunter just decided to spray paint him and then he let him back into the wild and he woke up and he was purple with pink polka dots…

Isabel was quite relaxed about her art, enjoying the process and making decisions.

It was so fun to watch the foxes come to life in all their stages… When they were in the process of getting painted, we talked about what we knew about foxes.

They all wanted to accentuate the names with exclamation marks!


Alyssa: Yours is red!
Tiggy: He’s mad.
Abi: Mine isn’t mad!
Alyssa: He’s showing off.
Lainey: He’s blushing.
Alyssa: No, he’s embarrassed.
Tiggy: Why does he have dots in his eyes?
Abi: Those are his sparkles.

Max had a pebble stuck to his fox’s head, and so it was declared a wart!

Hugo: Yah seriously, and it’s not just in Fantastic Mr. Fox. They do do that. If there’s a weak spot in a fence, a fox will find it.

Max: Foxes are quite clever, actually.

Hugo: More people know about hunting cats, then um, dogs, like dingo, fox, the fox is probably the most well known. - I’m really fond of this chestnut colour - They eat a lot of chickens.

Max: All I know is that they are blamed for stealing more than they could possibly eat. But they don’t waste one single bit. Some people think they just kill all of them, and only take some but in fact they just bury it for hard times. So they’re really good. And they always put the wolves as bad guys, which really bugs me. But the foxes are the nasty ones.

Finn discovered that covering his fox with paper mache was kind of like doing a puzzle -finding small pieces for tight areas, and bigger pieces for larger areas.

Finn: They have sharp teeth! And they are predators to bunnies. I think so. They definitely eat some kind of birds. They are carnivores I think. Ones that eat meat.

Finn got a kick out of the goop, and he lathered his hands with the stuff. He even recognized the potential benefits for soccer!

Finn: Do you know why it’s good for my hands to be crusty? After this when I go to soccer, and they’re still crusty, and we play hand ball, actually my hands really hit the ground, and with the crust, it won’t really hurt. It’s kind of like armor probably.