Finn came up with a brilliant idea. He wanted to build a maze, and fortunately I had just the right tools he needed. We got cardboard trays, and little strips of wood for the walls, and a trusty old mustard bottle filled with free-flowing white glue. 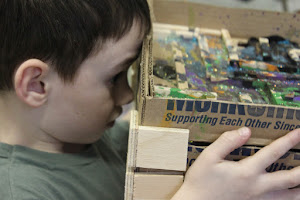 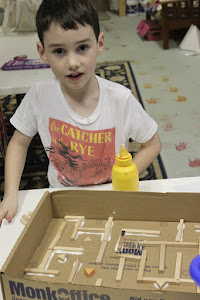 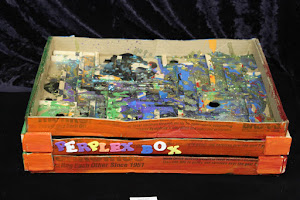 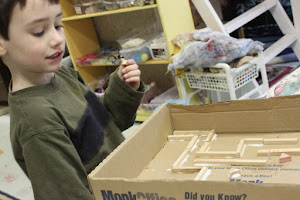 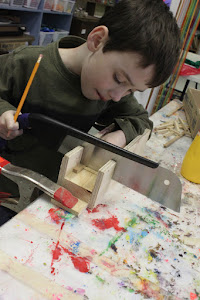 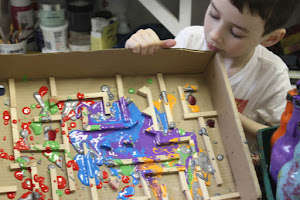 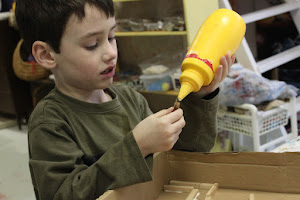 It was so fun to hear and see Finn’s ideas and vision come to life. He vocalized his creative process in words and little sound effects…

Finn: We should put little obstacles on the way…Now this guy can choose if he goes this way or that way. The obstacles can make it hard for him to go one way. This would be hard to do, right? Or, I could make it like this, and he could choose which way to go. Or I could make it at the end and he would be stopped.

There was so much thinking and planning and imagining the paths and dynamics of the game; Secret trap doors, holes, tricks and obstacles…

Finn: We could stack levels on top of levels, and once you fell though a trap door, you could take the level off, and to the next level. And then if you fall though the one in the bottom, you lose the game! And the winning one could be a secret trap door, that could bring you to the next one. And that secret trap door could flap open and close, then nobody could see it. … I like the way this is going!! Time flies when you’re having fun.

Finn: Hey, we could put lots of glue here, and it would be hard to get though because the glue would make it rise up a little. And it could be part of the game, like a trap. This is starting to sound like a tricky maze, don’t you think? This is a really challenging maze. Then I could put one of these right here, so it could knock you this way or that. This is starting to sound pretty cool!! But it will take a couple of days to make, don’t you think?

Finn: And after the bottom the level, there could be a little board that you say, that says “you lose”. The glue is kind of a little challenge to get by. There’s a little drop of glue right there, that would make you have to go that way. And we could put it like right here, because it would go like whhsssshhh. This is really cool, don’t you think? We’ve got the bottom pretty much worked out, don’t you think?

Rachel: There’s so many options!

Finn: That’s why it’s hard! Options make it hard, if there’s too many it makes it really hard. I like the way you’re thinking about this maze!

Rachel: I like the way you’re thinking too. We make a good team.

Finn: Yah, with mazes we do!

Rachel: Where should the winning hole be?

Finn: Right there, and then the winning hole could lead to the start of the other game. And then after the last level, if you win that one, there would be a little thing that we could make, and there could be a little split between the “you lose” part and the other part would say you win! So it would be a split.

Finn: Maybe you could put this right here, and then it would direct the ball here. There would be a little more space for the ball to get through. I think that’s a good idea. And then the ball would have to get by here.. It would be hard for the ball to get by, here, don’t you think, He’s like really squeezed, it’s be hard to get by. And then you’d be kind of deflected to here. We should put the good trap door right here. And the winning trap door is here. What if there was one good trap door in all of them?

Rachel: Should we glue all of these down then?

Finn: Yah, this is awesome. We’re done the first level! Don’t you think?

Finn: We could say “get 5 points going this way, and get 10 points going this way!” Because this would be like a plus area, there could be a bad trap door that could have a plus side, and you would go down, and the numbers you’d get would be a plus. But that’s a good trap door, and bad trap doors could lead to the next level but at the start, or another area that other trap doors are near, because bad trap doors are kind of dangerous. I like the way this is going. And once you go down the next level, you could take this off, and put it somewhere. And you could go back and forth, and then you could add the “you won, you lose” section.

Rachel: Or you could not take off the top, and do it blind!

Rachel: We might need to write a rule book!


Finn: If you think you’re really really really good, you could do it blind, and you’d have 6 minutes to go through the whole maze!

As Finn was deciding about the drops into level two, he was showing how clever his mind was!

Finn: Well, actually I think that should be a good hole. It’s kind of a trick because once you experience all of these ones, you’ll think they’re bad, and you’ll think this one’s bad too, once you experience all of those, but then that would actually be a good one. And we could just spell, “next level” right here, so you know when you fall into here… that’s a good hole, that’s a bad hole, and that’s a winning hole. There’s lots of obstacles, one path leads to a dead end, and one leads to a good one.

There was so much explaining and ironing out all the details. Each step of this project was a mental exercise! I was so impressed with the scope of Finn’s vision, how he configured his ideas and stuck to the ones he liked.

As Finn was splatter painting his maze, he was observing, and commenting on the properties of paint.

Finn: Paint goes through narrow spaces. Paint can do this maze easy, do you know why? Because paint can sometimes go around the sides of holes, like right now. Look it’s like a stream of all the colours, and they’re all going into the corner. The winning corner. Hey look, the sparkles are moving with the paint. They stick to the paint…. Look at the gold, it’s really sloppy, don’t you think? Hey look, the gold is carrying the silver now! Oh red is cool, it’s kind of like a vein don’t you think. Maybe paint is attracted to other paint. It won’t really go outside of it… Wow, I don’t know why it follows the gold…

Finn was watching the paint create paths inside the box as he tilted and tipped the box to get the paint moving around.

The next expansion of the game came in the form of trivia. Finn decided that to make the game extra hard, you would have to answer tricky trivia questions as you played level 2.

Finn: If you answer one of these trivia questions wrong, you’d have to get the ball and put it at the beginning again. On level one.