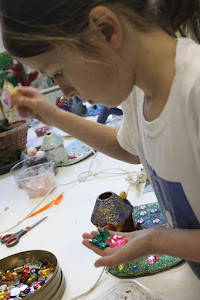 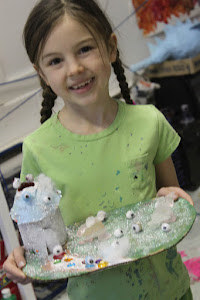 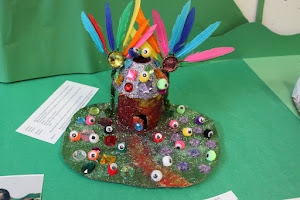 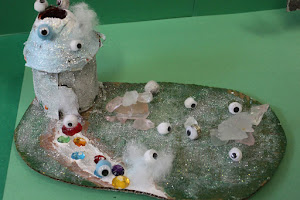 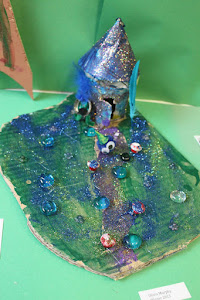 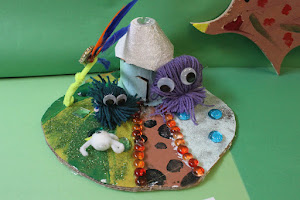 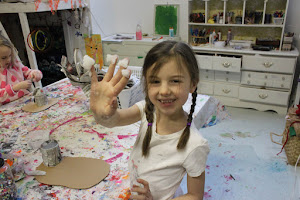 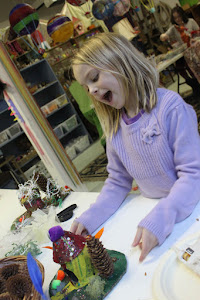 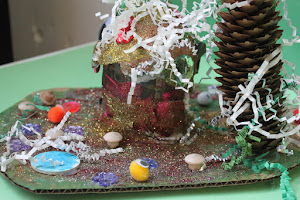 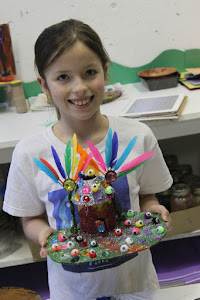 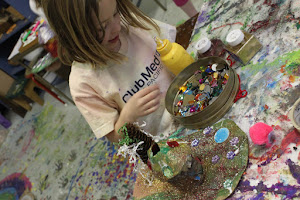 Abi: I’m going to paint mine pink and green. Different shades of green.


Alyssa: I’m going to do a path with glitter.


Alyssa: What colour is your fairy’s head going to be?

Isla: It’s not a banana. His name is Mr. Banana.

Alyssa: So, you don’t name something Mr. Banana, if they don’t look like a banana.

Isla: And he’s not a banana.

Alyssa: Well what if he looks like a banana.

Lainey: So Isla can name her man Mr. Banana.

Alyssa: To me he still looks like a Cyclops banana.

Lainey: Do you know what a Cyclops is, Isla? It’s a one-eyed thing.

Rachel: And you can all decide what kind of fairy lives in it.

Olivia: Mine’s not a fairy, it’s a WIZARD!

Alyssa: Oh my gosh, it does look like a wizard’s house.

Abi: Mine’s going to be a luck fairy.

Abi: I’m making a snow garden. It’s where you grow snow clouds, so you can snow wherever you want.

Lainey: You’re garden is half white, and half green. It’s half spring and half winter.

Abi: Well, cause it’s the winter garden, where you can grow clouds and make it snow in all the places you want to. Cause then if kids are wishing on their Christmas list that they want it to snow, then Santa Clause can ask to make it snow…

Abi: Look at my roof!

Lainey: At my house it rains sparkles, because I’ve got the sparkle fairy.

Abi: I’m mixing the blue and the white even more, so I can get a snowy blue… Can I have the white sparkles?

Rachel: How will you make it?

Alyssa: I don’t know. Or maybe their little dress could have snowflakes.

Lainey: Mine is a special house, because when you go inside it, it leads you to a magical land, with fairies, and wizards, and mermaids, and witches, and dragons. But if you don’t go to the magical place, then you stand outside and wish for where you want to go, and then you step inside, and then you wait 10 seconds, and then you step out, and you’re there. And on special days, there’s a volcano at the top and it explodes and there’s a glitter party. On one side of the house, it grows diamond flowers, and on one side it grows diamonds. And the flowers are special flowers. And the things that live in my area, they live in the garden of diamonds that surrounds the little miracle hut. Mine is called the Miracle Hut.


Isla: This is like a sailing boat, except it sails on land!

Abi made a little snow dog.

Alyssa: I’m done. My house doesn’t actually have a fairy. My house is similar to Lainey’s but it doesn’t go to a secret world. So you open the door, and it looks really small, but when you enter, it’s actually ginormous. It’s a whole little world.

The entrance to my house is sort of like yours, but you don’t travel to the world, it turns into the world you want it to.

The girls all got into making little cyclopses, or one-eyed pom-pom creatures. They added a bizarre mystical aspect to the fairy houses and yards.

Alyssa: Why is everyone making cyclopses now?

Lainey: My flower has magic petals, so they are very valuable but very rare.
Alyssa: What do they do?
Lainey: I don’t know, but they’re magical. And you can only use 3 wishes per petal.
Alyssa: And can they re-grow?
Lainey: Yep. It’s called a peackock flower, because it looks like a peacocks tail. See?

Alyssa decided to make magic inukshuks in her wintery garden.